We recently caught up with Jonathan Treeby, owner of JT Studios

Sonic Circus: What has been happening since we delivered the new API 1608 to your studios last year?
Can you elaborate on a few of the interesting projects you’ve been producing down there?

Jonathan (JT Studios): As for producing, I have been working with Tyler Kinchen and his band, The Right Pieces. We had recently enjoyed some success on radio in the UK and Europe with his first full length, Acoustic Disdrometer. SoulTrain.com gave it high marks as well. So were are working on a new project for Tyler and bringing in some of New Orleans’ best side men. Jeffery “Jellybean” Alexander just cut drums on the first 5 songs.  Jellybean (of Jon Cleary and the Absolute Monster Gentlemen, Papa Grows Funk, and Tab Benoit) is known for his deep pocket and consistent energy, on stage and in the studios. He did not disappoint. Neither did the new API 1608-32.  Even when we had the SSL 4064 G/G+, API preamps were responsible for most of our drum sessions, with Neve 31102s and 1073s as an occasional alternative. So 32 channels of API pres makes tracking a dream.

This was Jeffery “Jellybean ” Alexander tracking drums at JT Studios.

Legendary drummer, Owen Hale (Lynyrd Skynryd, Robert Plant, Levon Helm, Johnny Cash, Emmylou Harris, George Strait, Merle Haggard, Kirk Whalum, Dolly Parton, many more) has adopted our studio as his preferred tracking room. We recorded his side project a few years ago and he has become a great friend to me and the studio. He has always loved our drum sounds, due in large part to our live room and the API pres. In the last two weeks Owen tracked two new projects here, one blues, one Americana. His stories from Muscle Shoals and Nashville are priceless.

We are also hosting a new project for Adam Pearce of the #TheVoice2017. He has assembled a great band for his debut album. My role in this project is to set up the studio for a visiting engineer / co-producer and make the process comfortable and easy for everyone concerned. They are here to capture the sound of the room, particularly on drums. But we also capture great guitar and bass tones for them. Tracks are exported as flattened wav files with multiple takes for overdubs and eventual mixing in a home studio.

SC: The studio used to have an SSL 4K why the change?

Jonathan: Due to our location just outside New Orleans, maintaining a vintage SSL was difficult. We don’t have an abundance of qualified techs here like you might find in LA or Nashville. SSL does not support these consoles anymore, so getting parts was always an adventure. Even with the SSL, API was a big part of our sound, especially when tracking. We track rhythm sections for a lot of outside engineers and producers, including for the former studio owner, Dave Fortman (Evanescence, Ugly Kid Joe, Slipknot, many others). He loved the SSL for playback, but recorded drums through APIs and took those un-EQd tracks to overdub and mix at a smaller studio).

So for the modern workflow of most visiting producers, our focus has always been quick acquisition of great live tracks then exporting to the DAW of their choice. The SSL was not really contributing to what we do best. I was ready for something simpler and more reliable. I wanted to streamline the tracking process for visiting engineers. The API 1608’s features are just right for our workflow. I export tracks for visiting producers, but mix my own productions here using a combination of ITB and OTB methods.

SC: What was it like playing keyboards with the Neville Brothers and how did you get the gig?

Jonathan: One of the keyboard players they had was responsible for playing all the signature synths on Aaron Neville’s radio hits of that era. He also was a production guy, doing key tech and production management. When he had to take a leave of absence, the monitor engineer recommended me to fill the vacancy. The first couple of weeks, I filled the keyboard tech role and assisted the sound guys while I learned the keyboard parts for Aaron’s stuff.

The Nevilles had a great piano player who would set up his 88 key rig behind Art “Poppa Funk” Neville (Founding member of the Meters, and Neville Brothers) on his B3 and synths. The piano player was 10x better than me, but in Vegas at the Desert Inn, something went down and he was gone. So that night, I was told that I would be playing not only in the part time key player’s place, but also the piano player’s. I filled in both roles for about a year, playing the Ed Sullivan Theater stage for David Letterman’s show, and Rockefeller Plaza for the Today Show.

We played Radio City Music Hall, the Greek, and nearly 200 other venues that year. We toured with BB King all summer. Touring full time was never my ambition, but it was a great experience. I appreciate all the opportunities Art, Charles, Aaron, and Cyril gave me on the road and in the studio.

SC: What are you able to capture sonically with the new console and how are your tracks translating to the mix differently?

Jonathan: Like I mentioned before, APIs were always a big part of what we captured. But having 32 channels of API in the console instead of only 8-10 outboard channels before allows a consistency of sound on all the tracks when I want it. It is also easier to set up, with minimal patching around. Going all API when tracking seems to get me to a final mix faster. I still like to use my Neve, Chandler and Helios outboards for certain overdubs, but for tracking live drums, guitars, bass, keys, and scratch vocals, API more than does the job.

SC: What do you look for in a great studio intern?

Jonathan: Ability and desire to take notes.
Willingness to do the homework for their own benefit.
Open eyes and ears.
A balance of technical chops and creativity.
A love and appreciation for the artists we serve.

SC: What is special to you about the New Orleans studio recording and music scene.
What do you love about producing music there?

Jonathan: I love working with the old school players, real New Orleans characters whose talents have taken them around the world. A few years ago I had Antoine Domino III (Fats’ son), the bass player from Allen Toussaint’s band, the keyboard player from Irma Thomas’ band, Jellybean (aforementioned) on drums, the guitar player from Elvis Costello’s band. Sadly, a couple of these guys have passed since. One of them said to another during that session … ‘these days “old school” really means playing on time and in tune.’ Sadly, there is a large element of truth to that statement.

These guys are so humble, always open to listen and learn, and genuinely friendly. I try to pair up the top local veterans with the younger artists I teach and produce. Hiring a veteran player not only gives us great results, but we get a master class in studio musicianship in the process. We should all take advantage of their experience and show them appreciation.

Our location north of Lake Pontchartrain from New Orleans connects us as much with the surrounding areas as the Crescent City. We get a good mix of rock, blues, jazz, R&B, Americana, country, gospel, and ensemble classical work. We benefit from a wide scope of musical styles, and draw from neighboring states. Mississippi’s Gulf Coast is less than a half hour from here. I was born in uptown New Orleans on Mardi Gras day, and I love the city’s musical heritage. But my tastes are pretty eclectic. I enjoy the variety and greater connection to the heartland of America. I like a wide perspective on my musical influences.

SC: In addition to Producing engineering and keys you also mentioned you are a vocal coach.
Do you have any techniques for getting a vocalist to settle down in the studio and getting a great performance?

Jonathan: My approach is to remove barriers that hinder a good studio performance. For many singers, it is nerves. So before I put them in the booth and “red light fever” takes over, I will have the vocalist casually sing through the tune with me in the control room, commending what’s good and asking questions about what seems off. Sometimes I will put a vocalist out in the big room alone. That space sounds so amazing. 16′ -18′ ceilings, no parallel walls, no right angles. Beautiful wood floors. Playing or singing anything in there inspires confidence. The piano is nearby, so I can jump on there and coach melodies.

I can tolerate some big room sound on a lead vocal track if it inspires a great performance. Other techniques have to deal with what I call “practice scars” like singers habitually tensing up for what they think is a high note. Normally from the piano, I will coach a singer through the rough spot. We will deal with vowel shapes, phrasing, and even lyrical tweaks to make things more singable. I love the challenge. 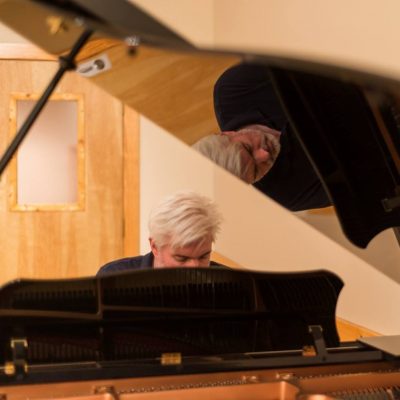 Jonathan Treeby at the Grand Piano

Sonic Circus knows vintage and contemporary audio equipment. We can help liquidate entire studios and assess the quality and value of the equipment. This gives us access to a wide range of the best vintage gear on the planet, as well as a unique ability to offer appraisals, and incorporate trade-in values as part of a quote.

Our goal is to help you to be better informed, and provide you with the best solution for your specific needs.

The Art of Recording
Featured Products