While Sonic Circus was putting together the equipment package and custom designs for Respect, we got a call regarding Genius: Aretha, the third season of a documentary drama series for National Geographic. This production was also being filmed in Atlanta. The Nat Geo crew also wanted Sonic Circus to supply period correct equipment and consult for their 8-part series. Starring Cynthia Erivo as Aretha Franklin, Genius: Aretha also had to include Fame Studios and Atlantic Studios NYC as well as live scenes from the Fillmore West 1971 and Rev James Cleveland’s church in Watts 1972 where “Amazing Grace” was recorded.

Both productions were being shot at the same time, so we had 6 weeks to recreate and deliver five studios worth of period-specific vintage recording gear and instruments. To start our process, we worked with both set design teams and explained what our supplied equipment was, based on photographs and video footage from Aretha’s recording sessions.

With our inventory of vintage amplifiers, tube mics, tape machines, and outboard gear, we had an excellent grasp on the period-specific pieces needed to make the productions historically accurate. One of the biggest challenges was coming up with five period correct consoles for the productions.

For Genius: Aretha, we acquired a late 60’s 1608 Electrodyne which originally came from American Recording in Memphis. We had a custom placard made that read, “Custom Built for Rick Hall and Fame” to emulate the original Fame Studios console.

Alongside this, we used 3M M79 tape machines that were dressed to look like the original Scully tape machines which were originally housed in the studio.

For Respect, we were also able to use the 1969 1608 Electrodyne for the Atlantic console (That was moved across town from Genius). We also fabricated a pair of 8 channel (Octopus) racks of Ampex 350’s.  These were used originally by Atlantic for additional mic inputs.

For Respect’s take on the Fame Studios console, a vintage UA Putnam 610 Console was supplied courtesy of Universal Audio. The CBS/Columbia console was custom CAD designed in the shop at Sonic Circus and fabricated from scratch.

To compliment the custom fabricated console, we also brought in a 3 track Ampex 300 recorder on loan from Memphis Magnetic Recording (originally from RCA Nashville), as well as 2 mono Ampex recorders. 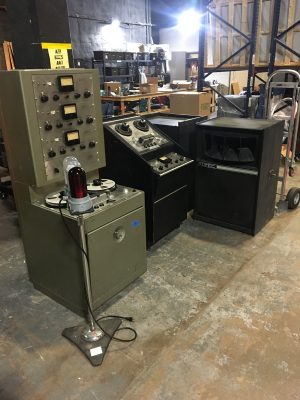 A cool bonus piece for those of you who will watch Respect when it is released: The George Starbird Boom Stands used in the CBS/Columbia scenes are the actual mic stands that were used at the original studio. A huge thanks to Ed Rak from Clinton Recording who acquired them from CBS/Columbia after The Church closed!

Along with our set consultation and custom console fabrication, we brought various Altec speaker systems, vintage drum kits, amps, reissue Telecasters, Fender P Basses, and a Gretsch guitar. The piece de resistance was supplying a Hammond C3 with Lesli as well as an old, green Wurlitzer just like the one Spooner Oldman originally played on those sessions.  Everything was loaded onto a dedicated 53’ semi and trucked down to Atlanta where we met up with both set design teams and consulted on the set ups.

After 25 years, Sonic Circus continues to house one of the worlds most diverse collections of used and vintage recording gear, our shop stays constantly busy doing restorations as well as custom design work for the recording industry.  The preservation of historical equipment is an important part of what we do as well as working with recording artists, producers and engineers who will continue to make great music with this gear for years to come, which is why we were trusted with these projects.