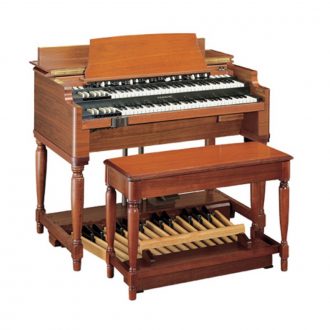 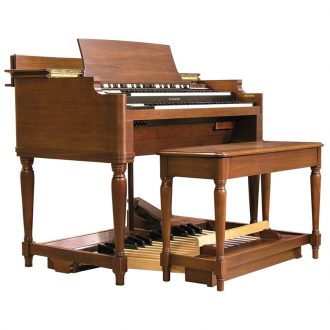 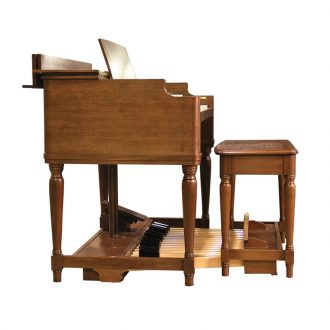 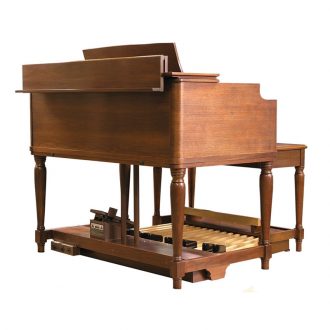 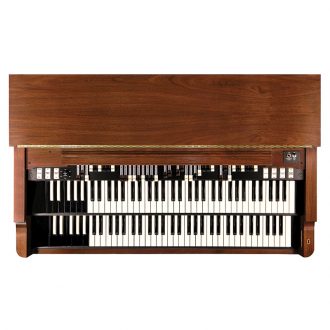 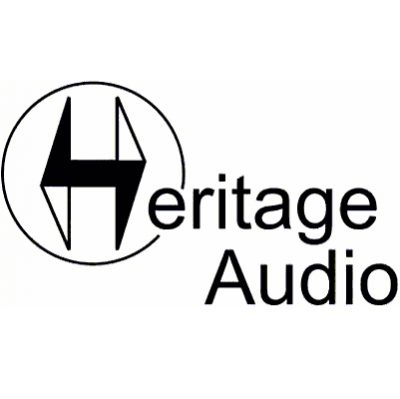 The Legend Lives On! Model B-3MK2

The New Hammond B3 MKII Organ is the latest incarnation of the “King Of Instruments”. Every facet, every detail, every nuance of the classic B-3 inside and out has been painstakingly replicated using the most sophisticated digital technology. No matter which “branch” of the Hammond family you are from-Gospel, Jazz, Pop, Rock, Blues, Soul or Country; you will find the touch, feel and sound of the NEW B-3MK2 as familiar as any B-3 you’ve ever played!.

At A Glance/By The Number

Laurens Hammond’s original Organ (invented in 1935) had an intricate electro-mechanical mechanism that used 96 Quarter-sized wheels spinning on driveshafts powered by his patented synchronous motor. The wheels were notched according to pitch, and an electromagnetic pickup (much like that on an Eelectric Guitar) sensed those notches and rendered a musical note. The Drawbars combined those harmonic tones to produce the inimitable Hammond Organ sound.

Hammond’s adherence to quality has allowed many vintage instruments to remain vital today, and they are among the most desired and imitated musical instruments ever, but at a high cost. The Electromechanical Hammonds require expensive maintenance, regular doses of oil, and were of great weight; not easy to move at all.

The B-3MK2’s DTW1 “Engine” uses the exact model of Laurens Hammond’s design, executing it in the digital realm, with no moving parts, retaining all of the nuances, imperfections and idiosyncrasies of the original. The wheels are always “spinning”. When a note is played, the tones pass, just as water through a faucet. The random starts of each wave played allow for phase interaction, producing the rich tone so prized in the vintage Hammonds.

The Digital realization of Laurens Hammond’s System allows sophisticated control of every facet. Each Digital Tonewheel can be voiced for Volume, Timbre, Motor Noise and Leakage; enabling the musician to tailor the Modern Hammond to match the characteristics of any Vintage Hammond, or to create their own vision. A variety of Macro Profiles allow the user to quickly select the most popular “kinds” of Hammond, from Showroom-New to Road-Worn Antique and all points between.

The Tonewheel Generator wasn’t the only great invention of Laurens Hammond, and no Hammond Organ would be complete without the full spectrum of ingredients that comprised Mr. Hammond’s genius design.

Mr. Hammond used the Pipe Organ Design concept of “Unification” in creating the iconic Drawbars of his Electronic Organ. This concept allowed one or more keyboards to control the pitches of many pipes within one set or “rank” of pipes. Adopting the harmonic standards and nomenclature of the Pipe Organ, Mr. Hammond’s design assured that any organist would be able to play his instrument without a steep learning curve. Unlike the Pipe Organ, Mr Hammond’s design allowed variable volumes of each Harmonic represented by each drawbar. This variation gave the musician millions of combinations of harmonics, and assured that every Hammond player would be able to summon a unique voice. An extra level to the expression a Hammond Organist had at their fingertips was added because the Drawbars could be manipulated in real time. The B-3MK2 features 4 sets of real drawbars in the size, shape and configuration of Vintage Hammonds.

One of the most distinctive parts of the Hammond sound is the shimmering “Chorus Vibrato”. It adds a silken quality to the sound by adding a second, slightly detuned pitch to the original in the Chorus Mode, and repeat-modulating the pitch slightly in Vibrato mode. Few musicians realize the Chorus effect pedal widely used for Guitars and Electric Pianos had its genesis as a component of the Hammond Organ. Mr. Hammond’s original design used an electromechanical apparatus that looked much like the distributors you would find in the automobiles of the day, and ran off the same synchronous motor that powered the Tonewheel Generator. The B-3MK2’s Chorus-Vibrato is executed in the Digital Realm, without moving parts, and works under the same model. The classic V1/V2/V3/C1/C2/C3 controls are familiar to anyone who has ever played a Hammond. As with the Tonewheel Generator, Digital control allows a wide range of adjustment that was simply not possible on the original. As the Antique organs aged, the components acquired their own unique qualities. Digital control allows the user to shape the Chorus/Vibrato’s various facets, with the added ability to “age” the effect-with the resulting treble emphasis and subtle distortion that marks the organs that develop this patina as “sweeter” than others.

The chief feature of the Hammond B-3 upon its release in 1955 was the inclusion of Touch-Response Percussion (Perc). This effect added a high “attack” to the Organ tone at either the octave or the twelfth, with a fast note decay. This sound was reminiscent of an xylophone or clave, and became immensely popular, immediately. Perc gave the Organ a bright highlight, and every generation of music has embraced this sound. Controls for the Perc have the classic nomenclature, familiar to anyone who has ever played a Hammond. On the B-3MK2, Perc is executed in the Digital realm, allowing a wide range of controls the organists back in the day did not possess. The 1′ drawbar muting, characteristic of the Vintage Organs can be defeated, as can the drop in Drawbar volume level that accompanied the engaging of the Percussion voice. You can control the volumes and decay times as well.

The Key Click you hear on the B-3MK2 is natural, originating in the Mechanical Buss-Bar Keying System, as it was in Vintage Hammond Organs. This Key Click is not adjustable, and as the B-3MK2 ages, the Key Click will do so as well in the same manner as the Vintage Models.

The inclusion of this obscure feature demonstrates the commitment to authenticity Hammond has brought to the B-3 mkII. Inside the Vintage Hammond B-3, on one side of the tube preamp, there was a “Screwdriver Pot” with the engraved legend “Tone”. This control was adjusted by the Technician installing the organ in order to tame the treble response in the instance of the organ’s installation in a Church or Mortuary, where a more muted organ was desired. The control was a cocktail of upper Mid and High frequencies (the proportions of which were, until recently, held secret. The “Tone” control was basically a “hi cut” control and only went “down”. You could not direct the control to go “up” for “boost”. The TONE control is included in the B-3MK2’s menu with the added benefit of being able to BOOST the unique blend of frequencies, which adds a nice “edge” to the Organ tone, if desired.

Chicago Engineer/Inventor Don Leslie bought a Hammond Organ not long after its introduction in 1935, but felt the instrument lacked the warmth of the Mighty Theatre Pipe Organs he so loved. The main difference between Church Pipe Organs and Theatre Organs was the deep Tremulant that took the edge off the Theatre Organ’s pipes and made them emotionally “sob”. Making use of an acoustic phenomenon called the “Doppler Effect”, Mr. Leslie constructed a speaker cabinet that used a simple system of rotating horns and baffles to give the Hammond tone “motion” and “depth”. This created a different instrument altogether, one that could play “Popular” music. Mr. Hammond intended his organ for the Church and Classical Music, looking at “Popular” Music with disdain-he wanted nothing to do with Mr. Leslie’s invention when Mr. Leslie demonstrated it. The public however, took the combination of Hammond and Leslie to heart, and so it remains to this very day. It is difficult to think of one without the other, although Mr. Hammond never allowed Hammond Dealers to sell Leslie Speakers. After Mr. Hammond’s death, the two companies became partners, and now Hammond owns and manufactures Leslie Speakers. For both Hammond and Leslie, the golden goal was to produce a Leslie that did not require motor-driven speakers, and the goal has been reached in the B-3MK2, with the finest Digital Leslie we have ever produced. The elusive effect can now be had where space and mobility have heretofore denied it. As an added benefit to being produced in the Digital realm, many aspects of the effect can be adjusted and tailored to ones own taste and requirement. Slow and Fast Rotor speeds, “Ramp Up” and “Ramp Down” speeds, Speaker Size, Amp type, Virtual Mic Placement and other parameters may be combined into “Cabinet” Macros which then may be assigned to any Organ Preset. In addition, 9 factory Cabinets, comprising the most popular Leslie Models like the 122, 147, 760, Vintage 31-H, and others are available for instant choice.

The B-3MK2 has 5 banks of 9 presets each, controlled by the Traditional “Reverse color” Preset keys at the lower end of each Manual. The entire B-3MK2 setup may be saved to a common CF Flash card for backup or restoration.

9 external MIDI zones may be controlled by the B-3MK2, with all settings saved as a preset. You can play these external zones with or without the B-3MK2 voices sounding. 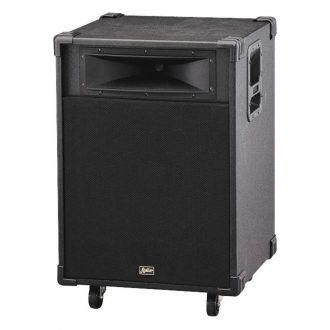 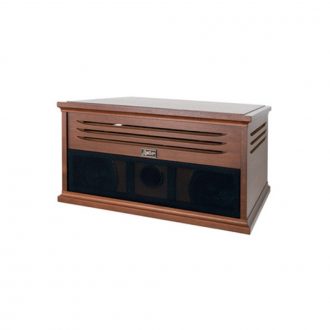 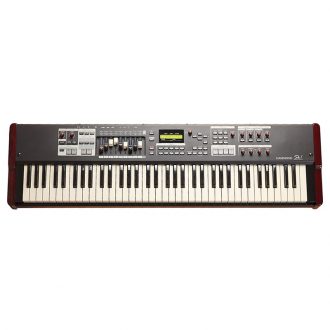 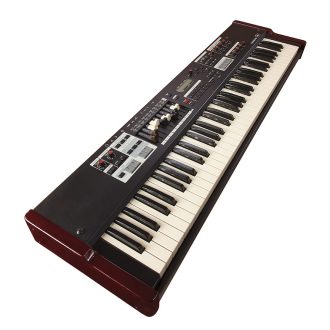 The Sk1-73’s 73 note Fatar keyboard provides the proper “breathing room” for a modern keyboardist, while retaining the superior feel, light weight and small footprint of the 61-note model. 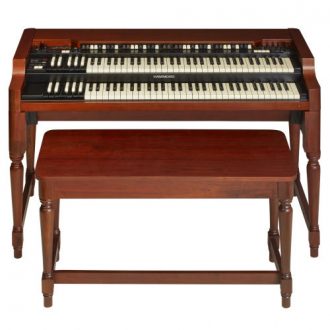 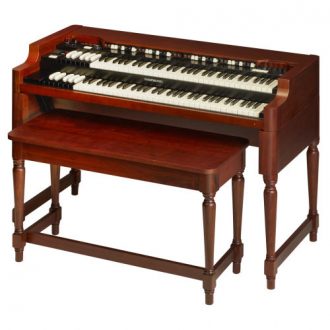 With matching 25-note Pedalboard and Bench, in Hammond's signature Red Walnut finish, it has never been easier to make a dream come true. 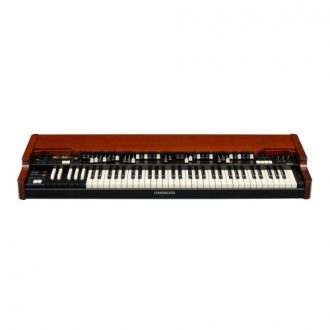 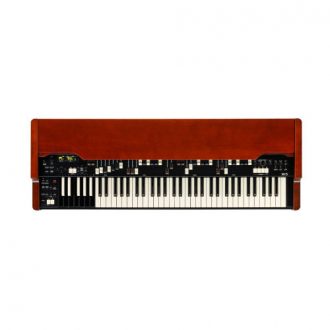 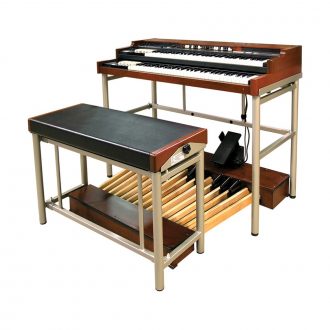 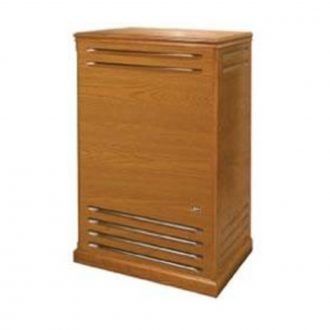 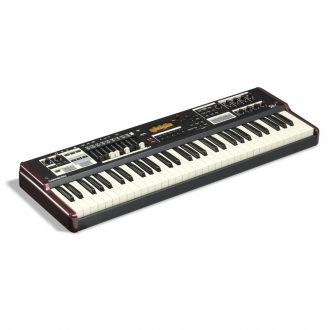 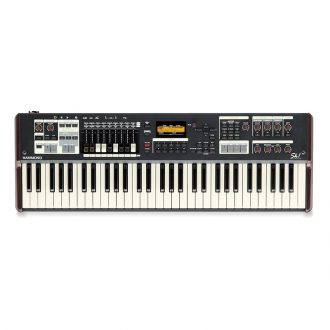 One of the most distinctive parts of the Hammond sound is the shimmering "Chorus Vibrato". It adds a silken quality to the sound by adding a second, slightly detuned pitch to the original in the Chorus Mode, and repeat-modulating the pitch slightly in Vibrato mode.